A Life in Ink – A Pandemic Project

In the fall of 2019, before any rumours of a strange new virus that had taken root, far away in China, Ralph and his family sat down to a pub lunch at their local haunt, The Chequers Inn in Loose. With them was Steve Crist, publisher of Proud to Be Weird keen to discuss the idea of a retrospective book covering Ralph entire 60 year career, from his student days to his most recent work.

The project began as one might expect, with calls to agents, contract negotiations and the sharing of extensive visual files from the Ralph Steadman Art Collection Archives.

The book would be 300 pages long so Steve Crist spent November 2019 until January 2020 slowly whittling down the choices ready to have originals photographed during the first week of February. A local photographer, Ollie Harrop, who had previously photographed Ralph for a book called The Artist in Time was hired to take the stills while the studio elves would scurry around locating the selected artworks. By early February the entire world was monitoring the spread of the deadly Corona Virus as it gradually infected people across the globe, like a deadly hitch-hiker using human’s love of air travel as its own personal chauffer. The name COVID 19 had not quite stuck by then. We had not quite progressed to first name terms, but it wouldn’t be long.

A month later, many countries were beginning to lockdown, forcing its citizens to stay in the homes to try and curb the virus’s spread. In the UK, we were about 2 weeks away from lockdown when the first proofs of the book began to be compiled.

Over the spring, linked by new online communication platforms like Zoom, Steve and Ralph’s team were in constant contact, creating quotes for the artworks, verifying dates and settling on titles for each of the nearly 300 pieces which would be included from across Ralph’s body of work.

Finally in June the first digital proofs were ready for review and using Dropbox, more information was painstakingly added, image by image, note by note. Restrictions had begun to be lifted in the UK. People were allowed to meet a friend outdoors, albeit at a distance of 2 metres and over the coming weeks more lenient rules would filter in. On July 7th, a Fedex package arrived with the full colour proof inside.

Back in the studio it was up to Ralph’s team to relocate all the originals and compare each proof. For the following 3 days an Ipad was used to photograph many a proof next to its artwork to demonstrate colour balance and comparisons. It enabled Steve’s team, working remotely or on a tightly controlled office schedule, never overlapping one employee with another to adjust and fine tune every single image. Sharpie pen scrawls appeared on the proofs circling missing areas of detail, would further highlight discrepancies in the copies and by July 12th the proof was headed back to the USA. 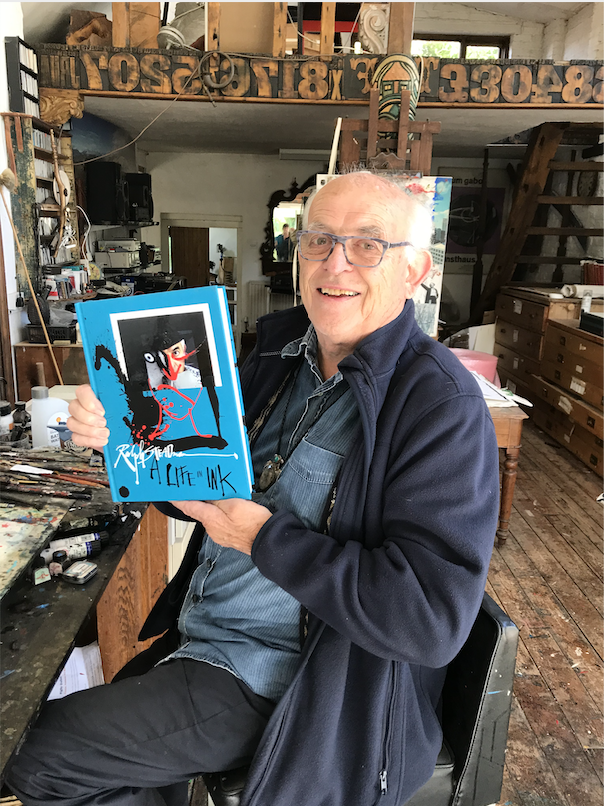 A  month passed and communication were fewer as final tweaks were made, the introduction was finalised and the pandemic seemed to have passed its first peak. Restaurants and bars in the UK were finally opening, hairdressers and beauticians were beginning to work again and it seemed in the UK that life was starting again.

Suddenly there was a thud on the welcome mat at Ralph’s home! An advance copy of A Life in Ink was in Ralph’s hands at last. A true project of the pandemic. It had been a strange journey from start to finish. From that moment in the Chequers Inn in October 2019 until it arriving in Ralph’s hands in September 2020, the world had changed. Everyone on the planet had been affected to a greater or lesser degree. It is our hope at least that this wonderful book from Chronicle Chroma can distract and enlighten in these uncertain and frightening times.